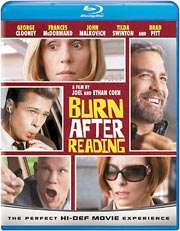 Universal Home Entertainment has added the Coen Brothers spy comedy Burn After Reading to their winter line-up on DVD and Blu-Ray Disc.

When a disc filled with some of the CIA’s most irrelevant secrets gets in the hands of two determined, but dim-witted, gym employees, the duo are intent on exploiting their find. But since blackmail is a trade better left for the experts, events soon spiral out of everyone’s and anyone’s control, resulting in a non-stop series of hilarious encounters!

The DVD version will feature an anamorphic widescreen transfer of the movie with Dolby Digital 5.1 audio. As bonus materials you will find a Making-Of Featurette on the disc, called “Finding The Burn,” as well as a Featurette “DC Insiders Run Amuck,” which shows the strength in putting together some of the most amazing talent in the world to create a world of Washington, DC insiders all trying to get ahead or find true love..

Also included is Welcome Back George, a companion, comedy piece, focusing on George Clooney as he
returns for his third collaboration with Ethan and Joel Coen.

The Blu-Ray version will boast a glorious 1080p high definition transfer with a DTS 5.1 HD Master Audio track as well as a DTS 5.1 track. You will find the same extras on the disc as on the DVD version, but this version will also come with a BD Live feature that allows you to access additional content and trailers through the Internet.