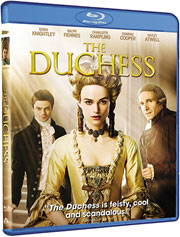 Paramount Home Entertainment has announced final details about the upcoming release of The Dutchess on DVD and Blu-Ray Disc this December.

One of history’s most beguiling leading ladies, Georgiana Spencer (Keira Knightley) was married at 17 to the wealthy and influential William Cavendish (Ralph Fiennes), the fifth Duke of Devonshire — and into a lavish world filled with shocking deceptions, decadent scandals and stifling demands of duty.   As Duchess of Devonshire, she first indulged her considerable energy in high society — outshining most of the aristocratic men around her with her incredible wit — only to become one of the most impassioned political voices in all of 18th century Britain.   Beloved by a nation but betrayed by her husband, Georgiana’s charisma, political savvy and distinct flair for  fashion would make her the “It Girl” of her era… but a chance for personal happiness would remain elusive until she dares to discover love on her own terms.

The DVD version will feature an anamorphic widescreen transfer of the film with Dolby Digital 5.1 audio. As bonus materials you will find the Making Of Featurette How Far She Went… that explores the life of Georgiana Spencer Cavendish and the era that she came to define. Georgiana In Her Own Words is a Featurette in which Amanda Foreman, author of the award-winning biography “Georgiana, Duchess of Devonshire,” and producer Gabrielle Tana hold a roundtable discussion at the archive of Chatsworth House – home of Georgiana and her family -reviewing letters, diary entries and artifacts that helped shape the historical landscape of Foreman’s biography, the inspiration for “The Duchess.”

Costume Diary is a look at the Duchess and her extravagant wardrobe. Costume designer Michael O’Connor talks about creating the outlandish and beautiful costumes that would become some of the film’s most flamboyant characters.

The disc is rounded out by the movie’s Theatrical Trailers.

The Blu-Ray version of the film will offer up a 1080p high definition transfer that is complemented by a Dolby Digital 5.1 TrueHD audio track. All the extras from the DVD version will be included on this release also.