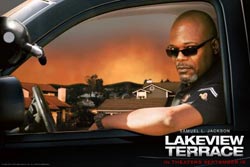 Sony Pictures Home Entertainment has just added another title to their January release line-up, announcing that the thriller Lakeview Terrace will make it to DVD and Blu-Ray Disc.

In this movie, a young couple (Patrick Wilson and Kerry Washington) has just moved into their California dream home when they become the target of their next-door neighbor, who disapproves of their interracial relationship. A stern, single father, this tightly wound LAPD officer (Samuel L. Jackson) has appointed himself the watchdog of the neighborhood. His nightly foot patrols and overly watchful eyes bring comfort to some, but he becomes increasingly harassing to the newlyweds. These persistent intrusions into their lives ultimately turn tragic when the couple decides to fight back.

No exact details and specs have been announced yet, but “Lakeview Terrace” arrives on DVD for $28.96 and on Blu-Ray for $39.95 when it hits retail stores on January 13.