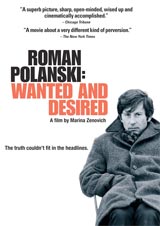 ThinkFilm has added the fascinating documentary Roman Polanski: Wanted And Desired to their release line-up, with a January shipping date.

One of the most controversial and brilliant directors, Roman Polanski has long been a subject of fascination for his films (Rosemary’s Baby, Chinatown, The Pianist) and his personal life. Reopening a case that sent shock waves through the world over three decades ago, Roman Polanski: Wanted And Desired intensely examines Polanski’s conviction for having unlawful sexual intercourse with a minor and the chaos that followed. With unprecedented access to the lawyers representing the case, the media covering it and the victim herself, the documentary is a startling indictment of our legal system and its paradoxical relationship with celebrity culture in contemporary America. Should Polanski continue to be banned from the United States? This film may change your mind.