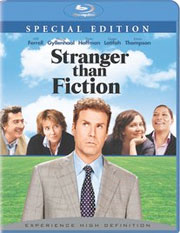 Sony Pictures Home Entertainment has added a new Special Edition of the film Stranger Than Fiction to their winter release line-up in December.

Will Ferrell stars as Harold Crick, a lonely IRS agent whose mundane existence is transformed when he hears a mysterious voice narrating his life. With the help of Professor Jules Hilbert (Dustin Hoffman), Harold discovers he’s the main character in a novel-in-progress and that the voice belongs to Karen Eiffel (Emma Thompson), an eccentric author famous for killing her main characters in creative ways. Harold must quickly track down Eiffel and stop her before she conjures up a way to finish him off.

The release will feature a 1080p high definition transfer in widescreen and serves it up with a Dolby Digital 5.1 TrueHD audio track.

As extras you will find a series of Deleted Scenes on the disc, as well as a Commentary Track featuring cast and crew members.

In addition to these, the release will contain a number of Featurettes, such as “On Location in Chicago,” “Actors in Search of a Story,” “Building the Team,” “Words on a Page” and “The VFX of Stranger than Fiction.”

Look out for your own reality to distort when “Stranger than Fiction” arrives on Blu-Ray again on December 2 for $28.95.