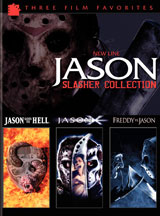 With the release of the latest movie in the Friday the 13th franchise scheduled to hit theaters on February 13, New Line Home Entertainment is also preparing a new DVD version of the previous film, calling it the Jason Slasher Collection.

The 3-disc DVD set will contain the movies Jason Goes To Hell, Jason X and Freddy vs. Jason. The DVDs will be the same as the previous releases, only packaged together in one set. In addition to the movies the box set will include a movie pass for up to $5 off the admission to the new “Friday the 13th” movie.

Mark February 3 in your calendar if you don’t own these films already, and set aside $23.97 for this release.