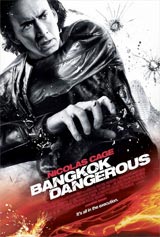 As a hired assassin, Joe (Nicholas Cage) is the best in the business but the years of stone-cold murder have taken their toll. Joe’s plan to make this current assignment in Bangkok his last takes a wild turn when he violates one of the most important rules of the game. Now the hunter is the hunted in this hard-driving, action-packed thriller.

The 2-disc DVD Special Edition will feature an anamorphic widescreen presentation of the movie, complete with Dolby Digital audio. The release will be loaded with extras, however exact details have not yet been unveiled.

The Blu-Ray version will offer the film up in a 1080p transfer restoring the movie’s original 1.78:1 widescreen aspect ratio, and will be complemented by a DTS 5.1 HD Master Audio track. Also coming as a 2-disc release, the title will be loaded up with extras, but the exact contents have yet to be announced.