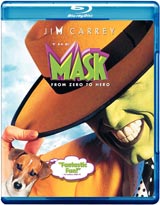 Check out the specs for Jim Carrey on Blu-Ray

In Dumb & Dumber, Jim Carrey and Jeff Daniels are hilarious as a pair of loveable losers on a cross-country road trip to return a briefcase full of cash to its beautiful owner (Lauren Holly). During the course of their moronic mission, these indomitable dimwits confound cops, kidnappers, rednecks and anyone unlucky enough to cross their paths.

The Blu-Ray Disc will feature the Unrated Cut of the movie with six minutes of new footage, in 1080p high definition with a Dolby Digital 5.1 TrueHD audio track. As extras the disc will contain a Retrospective Documentary called “Still Dumb After All These Years,” as well as Deliriously Dumb Moments. Clips of “Big Fire Stunt,” “Kung Fu Chef,” “Most Annoying Sound” and “The Toilet Scene” are also included, as well as a number of Additional Scenes and Alternate Endings. The release will be topped off by the movie’s Theatrical Trailers.

In The Mask, Jim Carrey stars as mild-mannered bank clerk Stanley Ipkiss, who discovers a mysterious ancient mask that brings his inner most desires to wild, screaming life! Now, together with his sidekick Milo, this wise-cracking green tornado is taking Edge City over the top in this romantic-action-comedy that will leave you S-s-s-smokin’!

The Retrospective Documentary “Return to Edge City” will be part of the release also, as well as the Featurette “Introducing Cameron Diaz.”

Next up is Cartoon Logic and the featurette, “What Makes Fido Run?” To round out the release there will also be the movie’s Theatrical Trailers

Both titles are slated for release on December 9, each with a $28.99 sticker price attached.