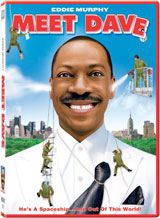 There’s something that makes Dave stand out from everyone else in New York City. It’s that he’s an alien! More accurately, he’s an alien ship, on a mission to Earth to save his home planet. Torn between the voices in his head – a tiny alien crew led by a high-strung, miniature version of himself – and the world around him, Dave struggles to appear normal. But when he falls for an Earth woman, the consequences are hilarious.

The DVD version will include a fullframe and a widescreen transfer of the movie, complete with Dolby Digital 5.1 audio. You will also find a Gag Reel and Crew Confessions on the disc.

“Meet Dave” will also arrive as a Blu-Ray version, featuring a 1080p high definition transfer and DTS 5.1 HD audio, as well as Dolby Digital tracks and the Gag Reel and Crew Confessions from the DVD version. To moke the high definition version a little more attractive, this version will also include Deleted Scenes and a few Featurettes entitled “The Making Of Meet Dave,” “Making A Scene,” “World Premiere” and Life after Film School.” You will also find an Alternate Ending on this release only as well as Crew Profiles.