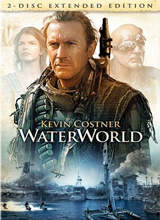 No, it’s not the Rhyme of the Ancient Mariner coming to DVD but instead, Universal Home Entertainment has prepared an Extended Version of Waterworld for release.

In this futuristic thriller Earth is covered with water and the human race struggles to survive on dilapidated boats and makeshift floating cities. Kevin Costner portrays a drifter who becomes caught up in the struggle between the evil Deacon (Dennis Hopper) and a child’s secret key to a wondrous place called “Dryland.”

Featuring a new 177 minute version of the post-apocalyptic Kevin Costner movie, the release will also contain the original theatrical cut of the film. Both versions will feature anamorphic video, of course, and Dolby Digital 5.1 audio, though you won’t find any extras on the release.

“Waterworld: Extended Version” will come to stores on November 8 for $19.98. Sadly no Blu-Ray version has been announced yet.