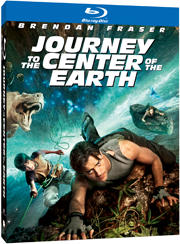 New Line Home Entertainment has just added this summer adventure family hit Journey To The Center Of The Earth to their fall release line-up on DVD and Blu-Ray Disc.

The DVD version will feature the movie’s widescreen and fullframe presentation on the same disc, as well as a Commentary Track by Brendan Fraser and director Eric Brevig. Also included is the Featurette “A World Within Our World”, discussing various historical theories about what lies beneath our planet’s crust. “Being Josh” is a Profile Featurette on 12-year old costar Josh Hutcherson, while “How To Make Dinosaur Drool” will give you a rare look behind the scenes. “Adventure At The Center Of The Earth Challenge” is an interactive Game that will round out the disc.

For a limited time, the DVD release will also include a 3D version of the movie, but only in its initial release batch.