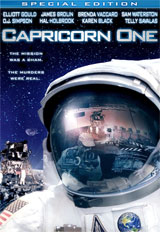 Lionsgate is currently putting the final touches on their Capricorn One: Special Edition giving the film a new DVD release with bonus materials.

What if one of the greatest space adventures was really a hoax?  When the head of NASA’s manned Mars mission discovers that the capsule meant to carry the astronauts will suffer a catastrophic failure, he forces them to participate in a hoax by broadcasting their “Mission” from a studio built at an abandoned air force base.  Over many months, the astronauts are forced to film broadcasts on their progress.  All is going well until they learn that the only way for the hoax to be maintained is for them to die upon re-entry.  Their only chance for survival is to make a desperate attempt to escape.  Throughout this period, an investigative reporter gets wind of the fact that something is amiss and slowly puts together the pieces of the mystery.

This fictionalized story, which still spooks some people’s minds as to what really happened with man’s landing on the moon, will arrive on DVD with anamorphic widescreen transfer and a remastered Dolby Digital 5.1 audio track. As extras you will find a Commentary Track by director/writer Peter Hyams on the disc, as well as the Featurette “Flights Of Fancy” and the movie’s Theatrical Trailer..