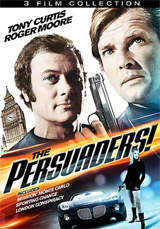 In “Sporting Chance” Brett Sinclair, a car-racing enthusiast, introduces his latest Sinclair Special, when all manner of unexpected things happen. Danny and Brett soon uncover a gang that’s been plotting to fix the race, but all is not as it seems. On solving the mystery, they head to Brighton to relax and soon find themselves involved in a case of mistaken identity.

And finally, in “London Conspiracy” highbrow Englishman, Lord Brett Sinclair and Bronx-born American fortune seeker, Danny Wilde seem an unlikely pair, but their friendship propels them on some wild and wacky adventures in Robert S. Baker’s London Conspiracy. On finding that a supposedly vacant mansion is occupied by a mysterious organization, Lord Sinclair and Danny have to overcome hostage-takers and black magic practitioners.

The release will come to stores on November 4 and can be yours for only $19.98.