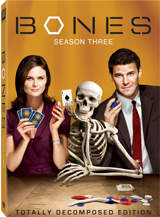 The 5-disc DVD set will feature all 15 full-hour episodes from the show’s third season, but will also include 4 bonus episodes from season 4. As bonus materials you will find 3 Extended Episodes on the release, together with a Gag Reel, an Extended Kiss Scene between Booth and Bones, and a series of Director’s Takes.