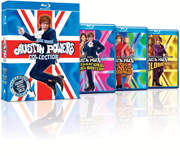 In Austin Powers: The Spy Who Shagged Me he’s back – back in the 1960s. Secret agent Austin Powers (Mike Myers) hops in a top-secret time machine and zips 30 years back to 1969 to confront Dr. Evil (Mike Myers) and his latest, vilest scheme. Evil is eviler – he has a diminutive clone Mini-Me (Verne J. Troyer) and massive Fat Bastard (Mike Myers) as a henchmen. Austin, who “put the grrr in swinger, baby,” is swingier…if he and fab spy chick Felicity Shagwell (Heather Graham) can recover the mojo Evil stole from Austin.

In Austin Powers in Goldmember the spy has a new mission: Shake booty into the glittery roller-disco days of 1975 and rescue his suave spy dad (Michael Caine) from the scheme of – Shh! – Dr. Evil (Mike Myers). The minions: freaky-flakey Goldmember, Fat Bastard (both played by Mike Myers) and Mini Me (Verne Troyer). The minx: Austin’s sassy ex-squeeze Foxxy Cleopatra (Beyoncé Knowles). The result: a three-for-all of grooviness that whisks from the 2000s to the 1970s and back to the 2000s – the screamingly funny third Austin Powers!

Each of the movies will be presented in 1080p with Dolby 5.1 TrueHD audio tracks. But you will also find a great number of bonus materials on each of the discs. “International Man of Mystery” will come with a Commentary Track with Mike Myers and director Jay Roach, Deleted Scenes and two Alternate Endings. Further, Music to Shag To will be included, an animated sequence of Austin Powers and
Vanessa “dancing.”

“The Spy Who Shagged Me” will feature a Commentary Track with Mike Myers, director Jay Roach and co-writer Michael McCullers, 21 Deleted Scenes and 4 Music Videos, including Madonna and Lenny Kravitz. Comedy Central’s “The Dr. Evil Story”, a faux biography-like documentary will also be included as well as a Beinhd-the-scenes Featurette.

“Goldmember” comes with a Commentary Track by Mike Myers and director Jay Roach, 15 Deleted Scenes with optional commentary and 4 Music Videos, including Beyoncé and Britney Spears. You will also find a Behind-the-scenes Featurette on the disc as well as a Trivia Track and additional Featurettes.

The “Austin Powers Collection: Shagadelic Edition Loaded With Extra Mojo” will show up in stores around the country on December 2 for $74.98.