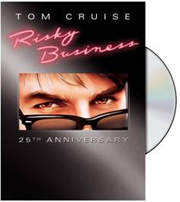 Warner Home Video has added the Tom Cruise comedy Risky Business to their line-up, scheduling the movie for release on DVD and Blu-Ray Disc in September.

Joel Goodsen (Tom Cruise) is a high school senior who is tired of being Mr. All American, facing ‘traumatic’ decisions such as which Ivy League college to attend. His life takes a totally unexpected turn when he meets a sexy call girl (Rebecca De Mornay) who transforms his house into a brothel while his parents are away, and at the same time transforms his entire perspective.

The DVD version will feature a new transfer with Dolby Digital audio and also contain an All-new Documentary entitled “The Dream is Always the Same: The Story of Risky Business” featuring interviews with Tom Cruise and other cast members. Also included is a Commentary Track with Tom Cruise, director Paul Brickman and producer Jon Avnet as well as a Director’s Cut of the final scene from Risky Business with an introduction by Paul Brickman. The Original Screen Tests with Tom Cruise and Rebecca De Mornay are also included together with the film’s Theatrical Trailer.

The Blu-Ray version comes with a 1080p high definition transfer and will include all the bonus materials from the DVD version. As additional extras, this version will also come with a Video Commentary by Tom Cruise, director Paul Brickman, and producer Jon Avnet in high definition and a Digital Copy of the feature film.