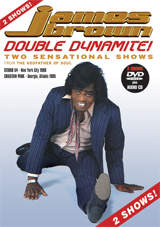 Performing right up to his sudden death on Christmas Day 2006 whilst he was in the midst of a major career revival, The Godfather of Soul’s media profile around the world has never been higher. James Brown was a true legend in his time and a major figure in the development of both soul and funk music. Remarkable as his latest live performances were, James Brown was at the height of his considerable powers when the two sensational performances featured on this Double Dynamite DVD were filmed.

The first show was recorded in 1980 at Manhattan’s ultra-fashionable Studio 54 – at that time a disco Mecca for nightlife preeners where you couldn’t get in if your face didn’t fit or you weren’t on the right guest list. The event caught the Godfather and his revue on top form, their barnstorming performance placing less emphasis than usual on the famous JB’s horn section being driven more by driving guitar and organ.

In contrast to the comparatively intimate setting of Studio 54, the second featured show captures him on home turf in 1985 when he played Atlanta’s gigantic Chastain Park Stadium. Following the basic formula of a James Brown show, they both feature impassioned readings of all-time stage favorites – such as “Please, Please, Please”, “Papa’s Got A Brand, New Bag” and “It’s A Man’s, Man’s, Man’s World” – with a sprinkling of recent songs thrown in for good measure.

With its dynamic footage, its extras and the detailed career and track notes in its accompanying lavishly-illustrated booklet, this DVD package is a fitting testament to his genius and a must-have for all fans of the Godfather, both old and new alike. It will be available in stores on September 30 for $19.95.