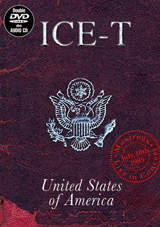 Music Video Distributor has added a DVD version of Ice T: Live In Montreux 1995 to their fall release line-up.

Ice T was at the height of his popularity and notoriety when this concert was recorded at the Montreux Jazz Festival in the summer of 1995. The set features all his biggest hits up to then, all gaining a new dimension in a live setting which enables him to improvise freely and react with his audience.

Including a second disc filled with almost two hours of bonus footage, including a reunion with Body Count a few years back, performing at an open air festival in California as well as recording a video together in the studio.

The highly-controversial recordings he made with Body Count in the nineties (particularly their notorious “Cop Killer”) made Ice T unofficial public enemy number one with America ‘s establishment and with the F.B.I.