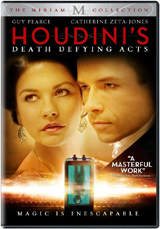 Genius Products has just announced the heart-felt and fascinating tale of love and intrigue, Houdini’s Death Defying Acts for release on DVD this fall.

“Houdini’s Death Defying Acts” is set in 1926, when Houdini (Guy Pearce) was at the top of his game and audiences flocked to watch him perform his amazing stunts. But the man behind the legend was a tortured soul, having been unable to hear his mother’s dying words. Offering a $10,000 reward to anyone who can contact his mother from beyond the grave, Houdini’s life is forever altered when a beautiful but deceptive psychic (Catherine Zeta-Jones) and her sidekick daughter (Saoirse Ronan) take on the challenge. Initially skeptical, Harry is soon captivated by the psychic’s charms.

No extras have been announced for this release, but look for “Houndini’s Death Defying Acts” on October 28 for $19.97.