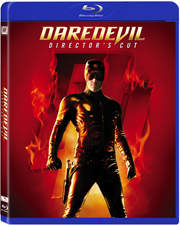 For Daredevil, justice is blind, and for the guilty, there’s hell to pay! By day, blind attorney Matt Murdock (Ben Affleck) toils for justice in Hell’s Kitchen. By night, he’s Daredevil, The Man Without Fear – a powerful, masked vigilante stalking the dark streets with an uncanny “radar sense” that allows him to “see” with superhuman capabilities. But when the love of his life, fiery Elektra Natchios (Jennifer Garner), is targeted by New York City’s ruthless Kingpin of crime (Michael Clarke Duncan) and his deadly assassin Bullseye (Colin Farrell), Daredevil may be about to meet his match.

Arriving as the Director’s Cut in 1080p high definition with a DTS Master and Dolby Digital audio tracks, the release will also be stacked with extras. Look for two Commentary Tracks, one featuring Mark Steve Johnson and Gary Foster, the other with Mark Steve Johnson and Avi Arad. Also included is a Text Commentary and the Making-Of Featurette “Beyond Hell’s Kitchen.” Further included are additional Takes of Daredevil/Kingpin and Elektra/Bullseye. Three Music Videos are also part of the release as well as a Music Promo Spot, Storyboards and various Galleries covering the production, the costumes, the set design, the props and other aspects of the movie. The Featurettes “Men Without Fear: Creating Daredevil,” “Shadow World Tour” and Modeling Sheets” are also included.