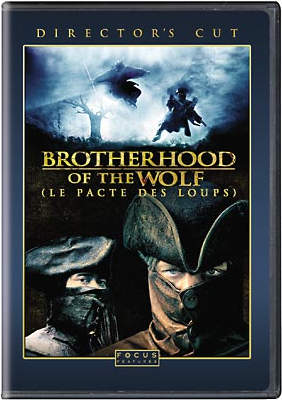 Universal Home Entertainment has added a new Diector’s Cut of Brotherhood Of The Wolf to their DVD line-up.

When a mysterious beast ravages the countryside, two unlikely heroes are called in to fight the evil. And now, their battle against dark, unspeakable terror is even more gripping with a daring extended version of the film that showcases more of the breathtaking martial arts action!

Coming as a 2-disc DVD set, the release will feature an anamorphic widescreen transfer of the movie with 7 minutes of additional footage re-inserted back into the film. Also included are 40 minutes worth of Deleted Scenes and the Featurette “The Legend,” uncovering the chilling historical facts behind the legend of the vicious Gévaudan Beast. Also included is on on-location Documentary with cast and crew members from the set of the movie as they deal with everything from fight choreography to costume decisions and weather challenges. A Making Of Featurette is also included, exploring the creation of the movie from its unlikely genesis to the breathtaking fight scenes and daring digital effects.

The set is rounded out by Storyboards and the movie’s Theatrical Trailer.

“Brotherhood of the Wolf” is out now for $19.98 but sadly no high definition version is in sight.