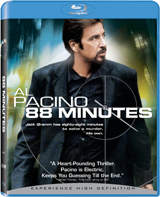 A college professor (Al Pacino), who moonlights as a forensic psychiatrist for the FBI, receives a death threat that says he has only 88 minutes to live. To save his life, he must use all his skills and training to narrow down the possible suspects, which include a disgruntled student, a jilted former lover and a serial killer on death row.

Featuring an anamorphic widescreen transfer with Dolby Digital 5.1 audio, the DVD version of the movie will also include an Alternate Ending as well as a Commentary Track by director Jon Avnet. Director’s Point Of View is a Featurette that shines some light on Jon Avnet’s work on the film and his relationship with Al Pacino. In The Character Within actor Al Pacino discusses what it takes to create the perfect character.
The Blu-Ray version will come with a 1080p high definition transfer and Dolby Digital TrueHD audio tracks in English and French. The release will offer up the same bonus materials as found on the DVD, all of them presented in standard definition, unfortunately.