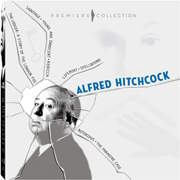 Nominated collectively for a total of 23 Academy Awards, the films included in this DVD set are beautifully restored and remastered and feature titles that have been out of print on DVD for several years. The eight-disc set is highlighted by Hitchcock’s Oscar winner for Best Picture Rebecca, starring Joan Fontaine and Laurence Olivier in a dark tale of love and obsession. Silver screen siren Ingrid Bergman makes an appearance in two Hitchcock classics; first alongside Gregory Peck in Spellbound, as a young doctor in pursuit of the truth and next alongside Cary Grant in Notorious, a tale of crime, passion and espionage. Rounding out the collection is Peck once again in The Paradine Case as a lawyer defending a beautiful woman accused of poisoning her husband, the spy thriller Sabotage, the romantic murder-mystery drama Young and Innocent, the suspenseful high seas thriller Lifeboat and one of Hitchcock’s earliest films, the terrifying whodunit The Lodger featuring an all-new anniversary score.

Each of the films will include incredible new extras some of which have never been seen before. “Rebecca” for example comes with a Commentary Track by film historian/author Richard Schickel, Screen Tests the Featurettes “Making of Rebecca,” “The Gothic World of Daphne Du Maurier,” and Audio Interviews in which Peter Bogdanovich interviews Hitchcock, and another one in which François Truffaut Interviews Hitchcock.

Also included is the Original 1938 Radio Play of “Rebecca” starring Orson Welles,, the 1941 Radio Play presented by Cecil B. DeMille and the 1950 Radio Play with Vivien Leigh and Laurence Olivier. The film will be rounded out by a Four-page booklet

“The Lodger” comes with the 1999 Score by Ashley Irwin presented in 5.1 Dolby Surround, the 1997 Score by Paul Zaza presented in Mono, a Commentary Track by film historian Patrick McGilligan, the Featurettes “The Sound of Silence” and “Hitchcock 101.” You will also find the 1940 Radio Play directed by Alfred Hitchcock on the release, as well as the Audio Interviews with Peter Bogdanovich François Truffaut interviewing Hitchcock and a Restoration Comparison.

“The Paradine Case” comes with a Commentary by film historians Stephen Rebello and Bill Krohn and an Isolated Music and Effects Track. Also included is the 1949 Radio Play starring Joseph Cotton, the Audio Interview by Peter Bogdanovich, a Restoration Comparison and a Still Gallery.

“Spellbound” arrives with Commentary by film historians Thomas Schatz and Charles Ramirez Berg. The Featurettes “Guilt by Association: Psychoanalyzing Spellbound,” “A Cinderella Story: Rhonda Fleming,” and “Dreaming with Scissors: Hitchcock, Surrealism and Salvador Dali” are included as well as the 1948 Radio Play directed by Alfred Hitchcock. Also look for an Audio Interview in which Peter Bogdanovich interviews Hitchcock, and one in which film historian Rudy Behlmer interviews composer Miklós Rózsa. A Still Gallery and a 4-Page Booklet round out this disc.

“Notorious” comes with a Commentary by film historian Rick Jewell, a Commentary with film historian Drew Casper and an Isolated Music and Effects Track. Featurettes on this disc include “The Ultimate Romance: The Making of Notorious,” “Alfred Hitchcock: The Ultimate Spymaster,” and the AFI Tribute to Hitchcock. The 1948 Radio Play starring Joseph Cotton and Ingrid Bergman is included also, as well as Peter Bogdanovich and François Truffaut Audio Interviews. rounding out the disc is a Restoration Comparison, a Still Gallery and a 4-Page Booklet.

“Young And Innocent” comes with a Commentary with film historians Stephen Rebello and Bill Krohn, an Isolated Music and Effects Track as well as Peter Bogdanovich and François Truffaut Audio Interviews and a Restoration Comparison.

“Sabotage” will feature a Commentary Track by film historian Leonard Leff, an Audio Interview by Peter Bogdanovich, a Restoration Comparison and a Still Gallery.

“Lifeboat” arrives with a Commentary Track by University of Southern California School of Cinema & Television Hitchcock professor and film critic, Drew Casper, the Featurette “The Making of Lifeboat,” the film’s original Trailer and a Still Gallery.

MGM Home Entertainment will unleash this incredible DVD set on October 14 for $119.98. “Rebecca,” “Spellbound” and “Notorious” will also be available as singe discs for a suggested retail price of $19.98 each.