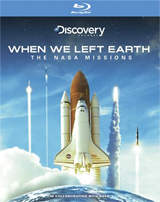 The Discovery Channel and Image Entertainment have just announced a Blu-Ray version of the wonderful new min-series When We Left Earth, to be released this fall.

Since the dawn of mankind, we have stared up at the lights in the sky and wondered… Now join the heroic men and women who have dared the impossible on some of the greatest adventures ever undertaken – the quest to reach out beyond Earth and into the great unknown of space! To celebrate 50 years of incredible achievements, the Discovery Channel has partnered with NASA to reveal the epic struggles, tragedies and triumphs in a bold chapter of human history. Along with the candid interviews of the people who made it happen, hundreds of hours of never-before-seen film footage from the NASA archives – including sequences on board the actual spacecraft in flight – have been carefully restored, edited and compiled for this landmark collection.

The release will be presented on 4 discs and feature the original 1.78:1 widescreen version of the movie, complete with DTS HD 5.1 audio. No extras have been announced, which is hardly surprising as the documentary mini-series documents everything there is to say.