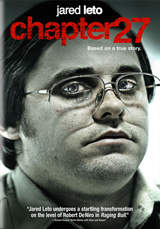 Genius Products has added their own film about the assassination of ex-Beatle John Lennon to their release line-up by scheduling Chapter 27 for release in September.

On a raw, cold evening in early December, 1980, Mark David Chapman (Jared Leto), a disturbed drifter from Hawaii, met ex-Beatle John Lennon. Moments later, the entire world was shocked senseless. Based on chilling true events, Jared Leto is unforgettable in his mental and physical portrayal of an unhinged and angry man whose descent into madness led him to commit one of the most infamous crimes of the 20th century. It is a psychological portrait like no other that will leave you stunned long after its nerve-shattering and tragic conclusion.

Directed by J.P. Schaefer this thriller will arrive on DVD in widescreen with a 5.1 channel Dolby Digital audio track. As extras the release will include a Making Of Featurette as well as the movie’s Theatrical Trailer.