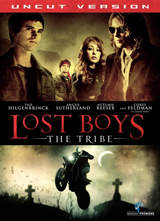 Warner Home Video has added The Lost Boys: The Tribe to their release line-up for July.

Risking everything in search of the ultimate rush is fun when you know you can’t die. Angus Sutherland, taking up where brother Kiefer left off in the original cult favorite, is the lead vampire in this modern reimagining of The Lost Boys. The seaside village of Luna Bay is rife with outcasts and plagued by an outbreak of missing persons. AS the sun sets, the Tribe rises: a group of adrenalin-fueled, thrill-crazed vampires tears up the surf and the streets with nonstop action. But when a champion surfer (Tad Hilgenbrinck) and his sister (Autumn Reeser) move in, dark secrets erupt into hot-blooded passion and full-blooded fear. Helping fight the forces of hell: Corey Feldman in his signature role of vampire hunter Edgar Frog. Once you join the Tribe, there’s no turning back.

The brand new sequel to the original vampire tale will come to you in 2.40:1 anamorphic widescreen as well as in a pan&scan transfer on the same disc. It will be complemented by a Dolby Digital 5.1 audio track.

As extras you will find the Featurettes “Lost Boys: The Tribe – Action Junkies” and “Edgar Frog’s Guide To Coming Back Alive” on the disc, as well as a selection of Alternate Endings. Also included are a number of Music Videos.