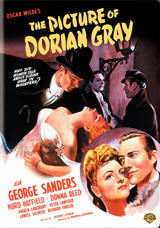 Warner Home Video is currently working on their Halloween slate of titles, which also includes the 1945 adaptation of Oscar wilde’s The Picture of Dorian Gray.

Years change, handsome Dorian Gray does not. He remains youthful- looking. But a portrait of him tells another story. It changes with the years, revealing the horrific effects of Gray’s life of debauchery and evil.

From Oscar Wilde’s novel and filmed in a rapturous, deep-focus style that earned a Best Cinematography Academy Award, this chilling tale remains unchanging in its power to entertain. Hurd Hatfield plays the rakish title character in this morality tale, also featuring George Sanders as a Wilde-like dandy who leads Gray to perdition, Best Supporting Actress Oscar nominee Angela Lansbury as a music-hall thrush victimized by Gray, plus Donna Reed and Peter Lawford. Every picture tells a story. But none tells as haunting a tale of terror like “The Picture of Dorian Gray.”

The release will offer a Commentary Track by Angela Lansbury and historian Steve Haberman in which they discuss the making of the movie. Also included is the Short “Stairway to Light,” as well as the Cartoon “Quiet Please!.” The release will be rounded out by the movie’s Theatrical Trailer.