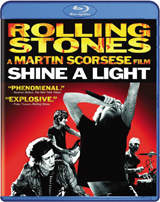 Paramount Home Entertainment has added The Rolling Stones: Shine A Light to their release line-up, bringing this acclaimed film to both DVD and Blu-Ray Disc.

The DVD version will feature a widescreen transfer of the film with Dolby Digital 5.1 audio. As extras the release will also include a Featurette and Music Videos for “Paint It Black,” “Undercover Of Night,” “Little T And A” and “I’m Free.”