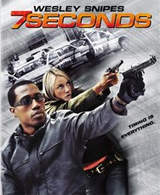 Information just arrived that Sony Pictures Home Entertainment has added the Wesley Snipes actioner 7 Seconds to their Blu-Ray line-up for an August release.

Captain Jack Tolliver (Wesley Snipes) is an ex-Delta Force commando leading what should have been a clockwork-perfect armored car heist. Instead, he ends up with a priceless Van Gogh painting – and one of his crew ends up held hostage by the sadistic Russian gangsters who muscled in on the heist. Tolliver’s only option: a suicidal rescue mission where enemies become allies, your best friend can be your worst nightmare, and survival is deadliest art of all.

The Blu-Ray disc will feature a 1080p high definition transfer with Dolby Digital audio tracks. Like the DVD version that was released some time ago this disc will not contain any notable extras.