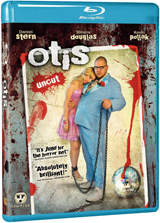 Warner Home Video has just added Otis to their Blu-Ray line-up, scheduling the title for a October release.

Otis has everything he needs for the prom: the corsage, the convertible, the cool baby-blue tux (not to mention the fully equipped torture chamber in his basement). He even has the girl – a pretty blonde he’s named Kim – who is dying to be his date. Literally.

Like the DVD version, the Blu-Ray Disc will feature a Commentary Track by director Tony Krantz and writer Erik Jendresen, as well as the 12-minute Featurette “The Twisted World of Otis,” a piece on the Dark Comedy of the film that contains interviews with the cast and crew, detailing how and why comedy works within the confines of the film. It also illustrates how this element separates Otis from other horror movies within the genre.

Look for the “Suite 16” Home Movie also, showing Otis’ fantasies made by Otis himself. The release also comes with an Alternate Ending with introduction by Tony Krantz. It is a starkly different ending in both tone and finality, this alternate vision that shows Otis exacting sick and twisted revenge on the Lawson
family. Four Raw Feed Trailers are also included to round out the disc.