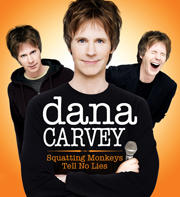 The DVD will also include a number of bonus materials, such as Bloopers and Deleted Scenes. Further a Q&A Session with audience members who attended his latest HBO special is included on the disc, plus a Bonus Disc of his first-ever, unreleased and uncut, HBO comedy special “Dana Carvey: Critics’ Choice****.”