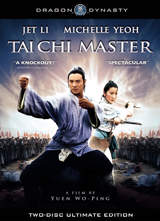 A pair of lifelong friends are expelled from their Shaolin temple after being accused of cheating. Tienbao (Chin Siu-Ho) becomes a powerful and oppressive military leader while the other, Junbao, (Jet Li) joins the rebels. Only the discipline of Tai Chi can help Junbao defeat his former friend.

Releasing the film as part of their “Dragon Dynasty” line of DVDs, Genius Products offers up “Tai Chi Master” with an anamorphic widescreen transfer and a DTS audio track in its original Cantonese, as well as Dolby Digital 5.1 tracks in Cantonese and English.

The disc will also contain a number of extras, such as a Commentary Track by Hong Kong Cinema expert Bey Logan and an Exclusive Interview with Chin Siu-Ho. Look also for the Featurette “The Birthplace of Tai-Chi: On Location in Chen Village.” Anatomy of a Classic is a look at the movie with celebrated film critic Elvis Mitchell, while “The Master” is a Retrospective Featurette on Jet Li’s career as a martial arts superstar. The release will be rounded out by a Trailer Gallery.