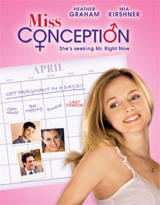 From First Look Studios comes a small independent comedy called Miss Conception that will arrive on DVD in August.

Georgina Scott (Heather Graham) is a broody 33 year-old who sends her partner packing when it becomes obvious that he doesn’t share her desire for a bundle of joy. Zak (Tom Ellis) was going away on a documentary shoot anyway and he hopes that she’ll cool off in his absence. But Georgina discovers that early menopause runs in her family and heads for a specialist with her reluctant best friend Clem (Mia Kirshner) in tow. Learning that her baby making days are numbered and her next cycle will be her last, Georgina enlists the help of Clem and their camp pal, Justin, to make the most of it. A battle plan is drawn up but their escapades become increasingly frantic and elaborate as Georgina explores internet sperm donors, night clubbers, builders and funeral-goers in her desperate and hilarious attempts to beat the biological clock.

The release will feature a widescreen presentation of the movie with Dolby Digital 5.1 audio. The only extra included on the release are Previews to other First Look titles.