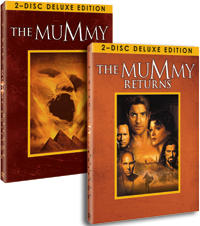 Universal Home Entertainment resurrects The Mummy and The Mummy Returns with new DVD and Blu-Ray Disc rerelease this summer, to celebrate the theatrical release of the franchise’s latest film.

In The Mummy, in 1290 B.C., an ancient Egyptian curse is bestowed upon an evil high priest for his unholy acts. Condemned to endure all eternity sealed in his sarcophagus in Hamunaptra, his still living, mummified body lies dormant, waiting to be discovered. Should the Mummy be released from his tomb, he will arise with a plague upon mankind, with the strength of the ages, power over the sands and the glory of immortality. 3,000 years later, dashing Legionnaire Rick O’Connell (Brendan Fraser) saves himself from imprisonment and certain death when he reveals knowledge he discovered years earlier as to the location of the now ruins of Hamunaptra. Joined by a beautiful Egyptologist (Rachel Weisz) and her brother, the journey to find the legendary riches buried beneath the sands take the unlikely trio down the Nile, across the treacherous expanse of the Sahara, and to an encounter with a malevolent force whose power defies imagination.

The new 2-disc Deluxe Edition DVD version of the film you will find Audio Commentaries with director/writer Stephen Sommers, executive producer/editor Bob Ducsay, and actors Brendan Fraser, Oded Fehr, Kevin J. O’Conner and Arnold Vosloo. Also included as Deleted Scenes, Storyboard Comparisons and a selection of Featurettes, such as “Visual and Special Effects Formation,” “An Army To Rule The World,” “Building A Better Mummy,” and “Unraveling The Legacy Of The Mummy.” As another bonus, a sneak peek at the upcoming “The Mummy: Tomb of the Dragon Emperor” will also be included.

The Blu-Ray version will include all of these features as well Universal’s U-Control feature and a Picture-In-Picture Video Commentary giving you a behind the scenes look at the making of the film while watching the
feature.

In The Mummy Returns, Arnold Vosloo returns as Imhotep with a vengeance. Now, the fate of mankind is at stake: the Mummy has been resurrected with an even more powerful force, The Scorpion King.

The 2-disc Deluxe Edition DVD version of the film will contain a Commentary Track with director/writer Stephen Sommers and executive producer/editor Bob Ducsay. Also included is a Storyboard Comparison and a selection of Featurettes, entitled “Visual and Special Effects Formation,” “An Army To Rule The World: Part 2,” “Unraveling The Legacy Of The Mummy” and “Spotlight on Location.” Also included is a Interview with Dwayne “The Rock” Johnson and the sneak peek trailer for the new Mummy movie.

Once again, the Blu-Ray version will include all these extras as well as U-Control and a Picture-In-Picture Video Commentary..