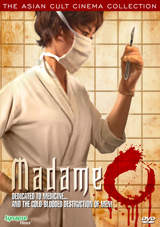 Synapse Films has just added the early Japanese movie Madame O to their release line-up in July as part of their Asian Cult Cinema Collection.

At the tender age of sixteen, Saeko (Michiko Sakyo) was sexually abused by three men, in a horrifying attack that not only scarred her mentally, but also left the young girl both pregnant and infected with syphilis.

Now a well-respected doctor in Tokyo, Saeko practices medicine by day and prowls the city streets at night in search of lovers. Possessed with a raging desire for revenge against men, she destroys them with the one weapon they cannot resist…sex! After eventually marrying and settling down, Saeko’s life changes for the better, but her new husband (Akihiko Kaminara) may also have his own dark secret…

The DVD version will feature a 16×9 enhanced widescreen transfer of the U.S. Theatrical Version of the film with and English language track. As extras the release will contain the movie’s original Theatrical Trailer and Liner Notes by Japanese film expert Jasper Sharp, author of the forthcoming FAB Press release “Behind the Pink Curtain: The Complete History of Japanese Sex.”