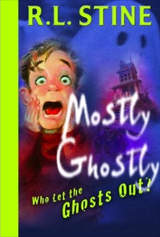 Universal Studios Home Entertainment has acquired the distribution rights to R.L. Stine’s Mostly Ghostly series from Toonz Animation. Stine’s latest series of spooky books has been a hit since its inception creating the perfect follow-up for his beloved “Goosebumps” series.

Now Universal is preparing an all-new, feature-length family adventure that’s sure to have parents and kids happily hiding behind the sofa pillows this Halloween season.

Based on the first in the popular eight-book “Mostly Ghostly” series by best-selling children’s author R.L. Stine with the title “Who Let The Ghosts Out?”, the film chronicles the eerie adventures of 11-year-old outcast Max as he helps protect Nicky and Tara – the sibling ghosts who live in his house – from the fume-spewing demon Phears.

No exact release date has been announced yet but expect to be scared in time for Halloween.