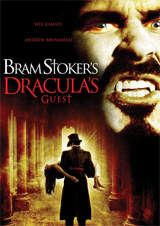 In their string of independent direct-to-video horror releases, Lionsgate Home Entertainment is preparing Bram Stoker’s Dracula’s Guest for release on DVD in August.

It may carry the name but in reality the film has absolutely nothing in common with Bram Stoker’s short story. Stoker’s short story has barely a plot and has long been rumored to actually be a deleted chapter from his acclaimed novel “Dracula.” Nonetheless, filmmakers are quick to exploit well-known names and this film is no exception, creating a story where there originally as none.

This film follows the story of two young lovers, Bram and Elizabeth, who are forced by her father, the Admiral Murray, to take one year probation from their relationship in order to determine whether their love is true. Meanwhile, the Count Dracula is in London searching for a new home and coincidentally, or not, comes across young Elizabeth at the train station after she’s run away from home and her father’s overbearing ways. Dracula, though, proceeds to kidnap her and take Elizabeth to his castle where he waits for her father’s arrival to settle an ancient dispute. Meanwhile, Bram’s friend Malcolm sets out to inform Bram of Elizabeth’s kidnapping but he soon falls to Dracula’s evil ways. And, upon finding his best friend dead, Bram sets out across Europe to rescue his true love.

Featureless this indie horror feature will arrive on DVD on August 5 for $26.98.