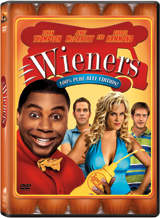 A string of “Saturday Night Live” alumnis are part of the comedy Wieners, which has just been slated for a DVD release in June.

When Joel (Fran Kranz) is publicly humiliated on national television by “Dr. Dwayne” (Darrell Hammond), he falls into a serious funk until his friends Wyatt (Kenan Thompson) and Ben (Zachary Levi) force him to join them on a cross-country road trip to smack down Dr. Dwayne. The three guys set out in Wyatt’s home-made wiener-wagon, handing out free hot dogs across America and encountering an endless array of oddballs, weirdos and losers, including loogie-hocking hippies, a flipper-fingered Walrus Boy and Ms. Isaac (Jenny McCarthy), the hottest sixth grade teacher ever!

The release will feature a widescreen presentation of the movie with Dolby Digital 5.1 audio and subtitles ins vast variety of languages. No extras will be included in this release.