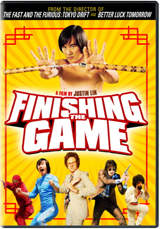 Are you ready for a hilarious re-imagining of movie history? Genius Products gives you the chance for just that when they release Finishing The Game in June.

The unexpected death of Bruce Lee, a world-wide phenomenon and established movie star, came at the peak of his popularity. Having already shot scenes for his upcoming movie “Game Of Death,” studio heads decided to complete the film by launching a search for his replacement, attracting hopefuls from all around the world. “Finishing The Game” is an uproarious, poignant, unpredictable and action-packed re-imagining of that casting process for Lee’s replacement.

Featuring a widescreen transfer of the movie with Dolby Digital audio, the release will also contain a Commentary Track by co-writer/director Justin Lin, co-writer Josh Diamond and composer Brian Tyler. Also included is Behind the Scenes Footage and a selection of Deleted Scenes with optional commentary. The Music Video “Satisfaction” by Far*East Movement will round out the release.

This promising independent comedy will make it to DVD on June 24 for $19.98.