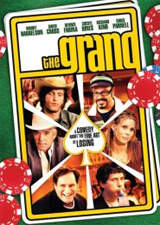 The DVD version will feature a widescreen presentation of the movie with Dolby Digital 5.1 audio. As extras you will find a Commentary Track with writer/producer/director Zak Penn, writer/executive producer Matt Bierman and actor Michael Karnow on the release. Also included are Alternate Endings and Deleted Scenes, as well as the movie’s Trailer, TV Spot, Player Profiles and the YouTube Contest Winning Video.