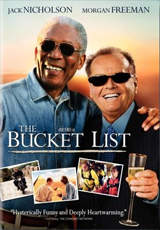 Warner Home Video is bringing us the latest Rob Reiner comedy, offering it up on DVD and Blu-Ray Disc.

You only live once, so why not go out in style? That’s what two cancer- ward roommates, an irascible billionaire (Jack Nicholson) and a scholarly mechanic (Morgan Freeman), decide when they get the bad news. They compose a bucket list – things to do before you kick the bucket – and head off for the around-the-world adventure of their lives. Sky dive? Check. Power a Shelby Mustang around a racetrack? Check. Gaze at the Great Pyramid of Khufu? Check. Discover the joy in their lives before it’s too late? Check!

The DVD version will offer a widescreen and fullframe presentation of the movie on the same disc, complete with Dolby Digital 5.1 audio tracks. As extras you will find the Featurette “Writing a Bucket List” on the release, in which screenwriter Justin Zackham discusses the creation of the movie’s script. Also included is John Mayer’s “Say” Music Video.

The Blu-Ray version with its 1080p widescreen transfer will contain the same extras as the DVD version.