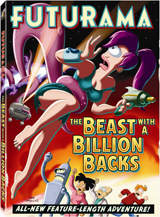 When last we left our intrepid crew at The Planet Express, Bender had opened a rift to destroy the universe. But fear not, Bender, Fry, Leela and the rest return inf Futurama: The Beast with A Billion Backs direct to DVD this June.

In Futurama’s latest and most tentacle-packed epic, space itself rips open, revealing a gateway to another universe. But what lies beyond? Horror? Love? Or maybe both, if it happens to contain a repulsive, planet-sized monster with romantic intentions! Nothing less than the fate of human and robot-kind is at stake as the Futurama crew takes on The Beast With A Billion Backs.

Although the last DVD had a few fun features, the new installment is chock full of goodness including an audio commentary, Futurama: The Lost Adventure (produced for the video game) which also includes commentary, the featurettes Meet Yiyo! and A Brief History of Deathball, Blooperama, 3D Models, storyboards, deleted scenes and a sneak peek at Futurama: Bender’s Game.

Sadly the future must remain on DVD for now; no Blu-ray announcement has come forward. The DVD arrives on June 24th for $29.98.