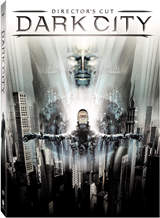 When John Murdoch (Rufus Sewell) wakes with no memory at the scene of a grisly murder, he soon finds himself hunted by the police, a woman claiming to be his wife and a mysterious group of pale men who seem to control everything and everyone in the city.

With a running length of 111 minutes, this new cut of the movie will arrive on DVD in widescreen with 5.1 Dolby Digital audio and plenty of never-before-seen footage. As extras look for 3 Commentary Tracks that take you deeper than ever before into the world of one of sci-fis most exciting and revered tales.

From what we have been able to gather, the Blu-Ray version will be identical in features but, of course, offer up a 1080p high definition transfer of the movie with high definition audio tracks.