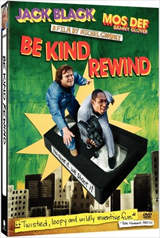 For a movie that celebrates the old fashioned VHS tape, there’s a fun irony that Be Kind Rewind will arrive on Blu-ray disc before hitting standard DVD.

As we have announced previously, New Line Home Entertainment is preparing Michael Gondry’s comedy Be Kind Rewind for release, showing us the antics of two outcasts, Jack Black and Mos Def, as they attempt to save a local video store from extinction. The release will contain the widescreen version of the film as well as a fullframe transfer on the same disc, together with a Behind-the-scene Featurette.

“Be Kind Rewind” will be available on June 10 on Blu-Ray, while the DVD version will arrive one week later and can be yours for $27.95.