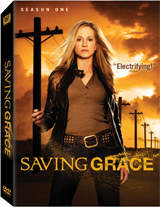 Grace Hanadarko (Holly Hunter) is a hard-living Oklahoma City detective whose life is careening dangerously out of control. After killing a man in a drunken car crash, Grace is given a second chance in the unlikely form of a gruff, tobacco-chewing angel named Earl whose job is to help her turn her life around. But divine intervention doesn’t come easily. As dark secrets are revealed, Grace must come to grips with her explosive past.