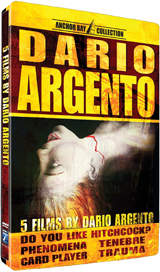 “The Dario Argento Box Set” is the quintessential assemblage of Argento’s brilliance and includes such masterpieces as:

Do You Like Hitchcock?, Argento’s personal homage to his life-long idol, starring Elio Germano and Chiara Conti.

Each of these films boasts a variety of DVD special features, including audio commentaries, behind-the-scenes retrospectives, trailers and more.

“The Dario Argento Box Set will arrive on May 27 with a $49.97 sticker price. Fans may also be pleased to hear that for this release anchor Bay is revisiting the Tin Box Packaging they used for certain special editions a few years back, giving the release a very unique and prominent look and feel.