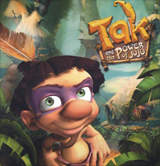 Paramount Home Entertainment has scheduled a release of the animated Nickelodeon show Tak And The Power Of Juju for release in June.

Based on the successful video games, this show revolves around a clumsy kid in a primitive jungle tribe who suddenly gets amazing magical powers, and creates chaos as he learns to use them. “Tak And The Power Of Juju” is a CGI slapstick comedy set in a fantastical jungle world. The series follows the Pupununu people, an unlucky, primitive tribe, and their struggle with the Jujus – ancient, mysterious magical beings who live among them. The only Pupununu who has Juju Powers is Tak, an impulsive kid whose main interest is goofing off with his friends. Tak’s powers allow him to access magic usually only available to the Jujus. But Tak has had zero magical training. So instead of giving him success and respect, his powers — combined with his over-active imagination, his awkwardness, and his plain bad luck — always get Tak (and the villagers and even the Jujus) into outlandish trouble.

“Tak And The Power Of Juju: The Trouble With Magic” will feature select episodes from the show on one disc and will arrive in stores on June 24 .