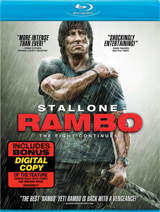 Sylvester Stallone’s latest film, Rambo will be arriving on DVD and Blu-ray Disc soon and he will bring along his old movies thanks to Lionsgate.

Several releases are in store for the freedom fighter. The new “Rambo” will appear on a single and double disc DVD packed with bonus materials, as well as a Blu-ray disc featuring the same extras, plus a full-blown DTS HD 7.1 audio track, alongside a Dolby Digital 5.1 EX track.

Lionsgate is also revisiting the original Rambo movies and a six disc box set will be available containing all four Rambo films as well although no Blu-ray set is planned as of right now.