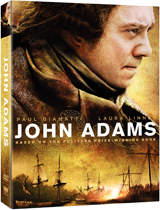 HBO’s mini-series and TV shows that are based in history are always a real treat and as such I am sure that many of you are looking forward to the DVD release of John Adams, which the studio has just scheduled for a release in June.

John Adams is a sprawling HBO miniseries event that depicts the extraordinary life and times of one of Americas least understood, and most underestimated, founding fathers: the second President of the United States, John Adams. Starring Paul Giamatti in the title role and Laura Linney as Adams’ devoted wife Abigail, “John Adams” chronicles the extraordinary life journey of one of the primary shapers of our independence and government, whose legacy has often been eclipsed by more flamboyant contemporaries like George Washington, Thomas Jefferson, Alexander Hamilton and Benjamin Franklin. Set against the backdrop of a nation’s stormy birth, this sweeping miniseries is a moving love story, a gripping narrative, and a fascinating study of human nature. Above all, at a time when the nation is increasingly polarized politically, this story celebrates the shared values of liberty and freedom upon which this country was built.

Coming as a 3-disc DVD set, the release will feature the entire 501-minute long TV mini series in anamorphic widescreen.

According to HBO’s early information, the release will also contain a Featurette,, a Documentary and Production Notes.