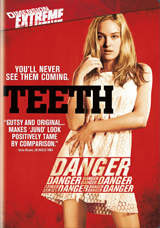 The Weinstein Company has produced a rather unusual horror film, Teeth, that is making its DVD debut in May, courtesy of Genius Products.
Dawn (Jess Weixler) is a pretty but prim high school virgin who unknowingly has a set of mutant teeth between her legs. When a supposedly likeminded boyfriend forces himself upon her, Dawn’s vagina dentata start chomping – which is just the beginning of “the most twisted story of female empowerment ever told” (DreadCentral.com). Caught between her emerging sexuality and a host of oversexed young men, including her twisted half-brother, Dawn eventually gives in to her freakish powers in “the most alarming cautionary tale for men…since Fatal Attraction” (Kurt Honeycutt, The Hollywood Reporter).

Reminiscent of the “Killer Condom”, the film will be presented in anamorphic widescreen on the disc, complete with Dolby Digital 5.1 audio. No extras have been announced.